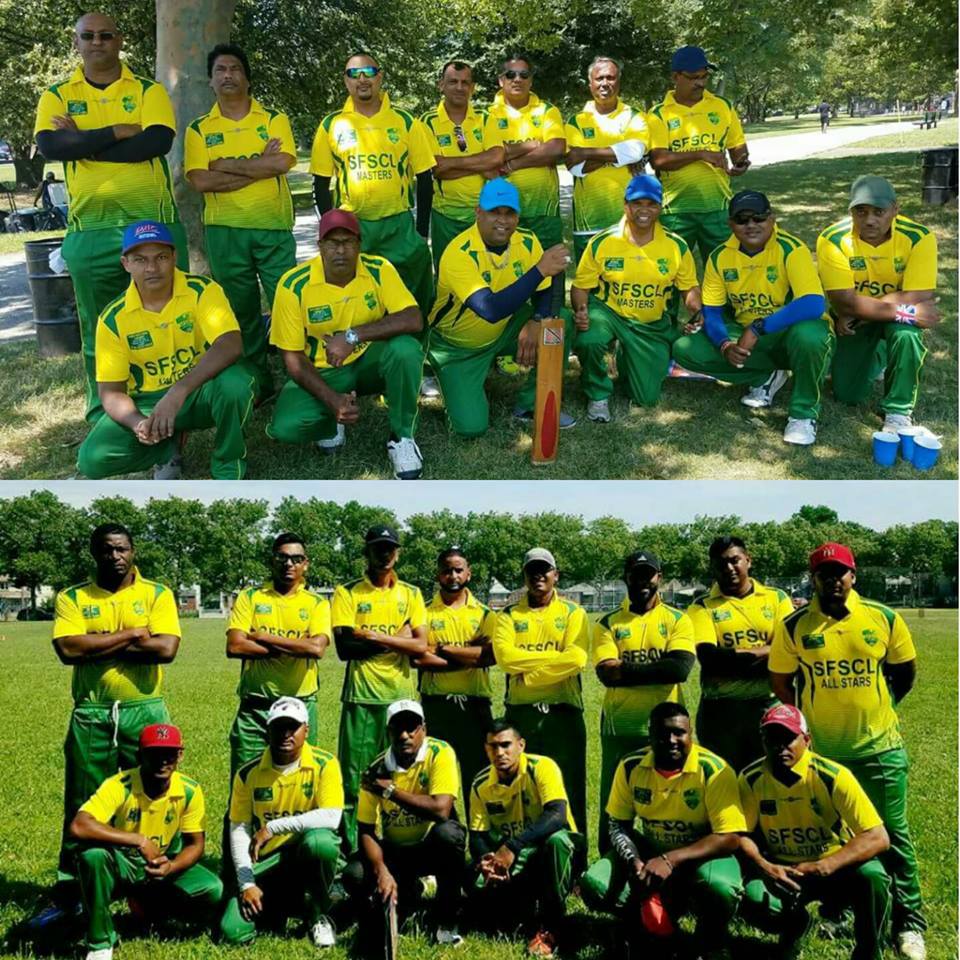 After much planning over the last few months and with great anticipation, both the SFSCL Allstars and Masters squads headed out to NY to compete in the Annual 2017 Indy Cup in Queens/ Brooklyn this past weekend being hosted by the NYSCL.

Both squads shared the same successes as well as some disappointments over the 3 day competition but generally it was an enjoyable and positive trip for both the management and all the players involved.

The Allstars draw did not favor them as they saw themselves in the strongest  group possible as they started the games on early Friday morning. Led by their likeable manager Dave Singh, on his first trip as manager, the Allstars managed to compete in all three of their games but fell just short due to over exuberance and a lack of calmness with their young batting lineup. The first two games they competed in and gave themselves a good chance of winning but unfortunately just fell short. They ended up losing their 3rd game on saturday morning to see their competition end early. Kevin Budhna had an outstanding competition with the bat and was well supported by Anil Bhawani, Anoop Basdeo, Rookesh, Ryan Adam, Masood, Raj Seepersaud, Damien Vincent, Ramesh and Tariq Jameer all contributing in other areas.

The SFSCL Masters team defeated both Guyana Legends and the NY Presidents teams but lost to the beaten finalists Regal Masters which meant they unluckily, went out of the tournament on a lower run rate after winning 2 games and losing one. Nazim Alli had a consistent competition with the bat with other notable performances coming from Joey Raghunandan, Narine Bacchus, Trevor Persaud , Chris Arjoon, Ravi Ramdeo, Joseph Mohabir, Kaiume Mohammed, Rajin Baksh, Anil Junglee, Bud Amin, Amar Singh and Lenny Mangra.

There were many positives on this trip as new players playing for the SFSCL squads for the first time were exposed to a different level of cricket they currently experience most sundays but they all bode well for years to come as they gained valuable exposure and experience against the top players around the softball circuit.

Dave, Fahron, Basil, Jamal all did an amazing job in managing the players as they made it through the entire weekend without losing anybody. Their commitment to both teams was outstanding and this made it easier for both team captains to concentrate on the games only. We applaud all four of you gentleman for leading us in the right direction during the daytime and making sure food, water, bandages, and painkillers were easily accessible for us during the entire trip. Organising transport for close on 30 players usually ends up as a recipe for a disaster but these 4 team managers made sure everybody was accounted for and ready to play during the day as well as the evening.  The players all supported the local businesses in the Queens area such as Kaietuer, Legend Cookhouse, Singh’s Roti Shop, New Thriving Restaurant and many more during our 4 day stay as many a dollar was spent by everybody.

With any tournament there will always be a few hiccups and the organisers will need to understand that teams spending time, money, and effort to support them expect fairness to be equal to all teams playing in return. Rules are put in place for a reason and umpires need to be better informed, more knowledgeable, and to be fair to every team, rather than making up rules as they see fit. The level of umpiring was very disappointing.

Now that the dust has settled, and the champions have been crowned in both competitions, NYSCL & Guyana Floodlights respectively,  the SFSCL teams will now look forward to our next tour with eager anticipation in a few months time when we all head out to Guyana.

Many thanks go out to NYSCL for inviting us as well as all the players who took time off from work who spent their own money for accomodation and plane tickets to support the SFSCL league teams coming from S Florida, Orlando and NY. Those same players will always be asked first as to their availability for when we host our very own Florida Cup next year.

Finally we want to thank all the generous vendors for sponsoring with their donations for both teams and helping with offsetting costs to send our league teams on tour. Your support was very much appreciated by us all.

We look forward in seeing you all again in NY 2018.